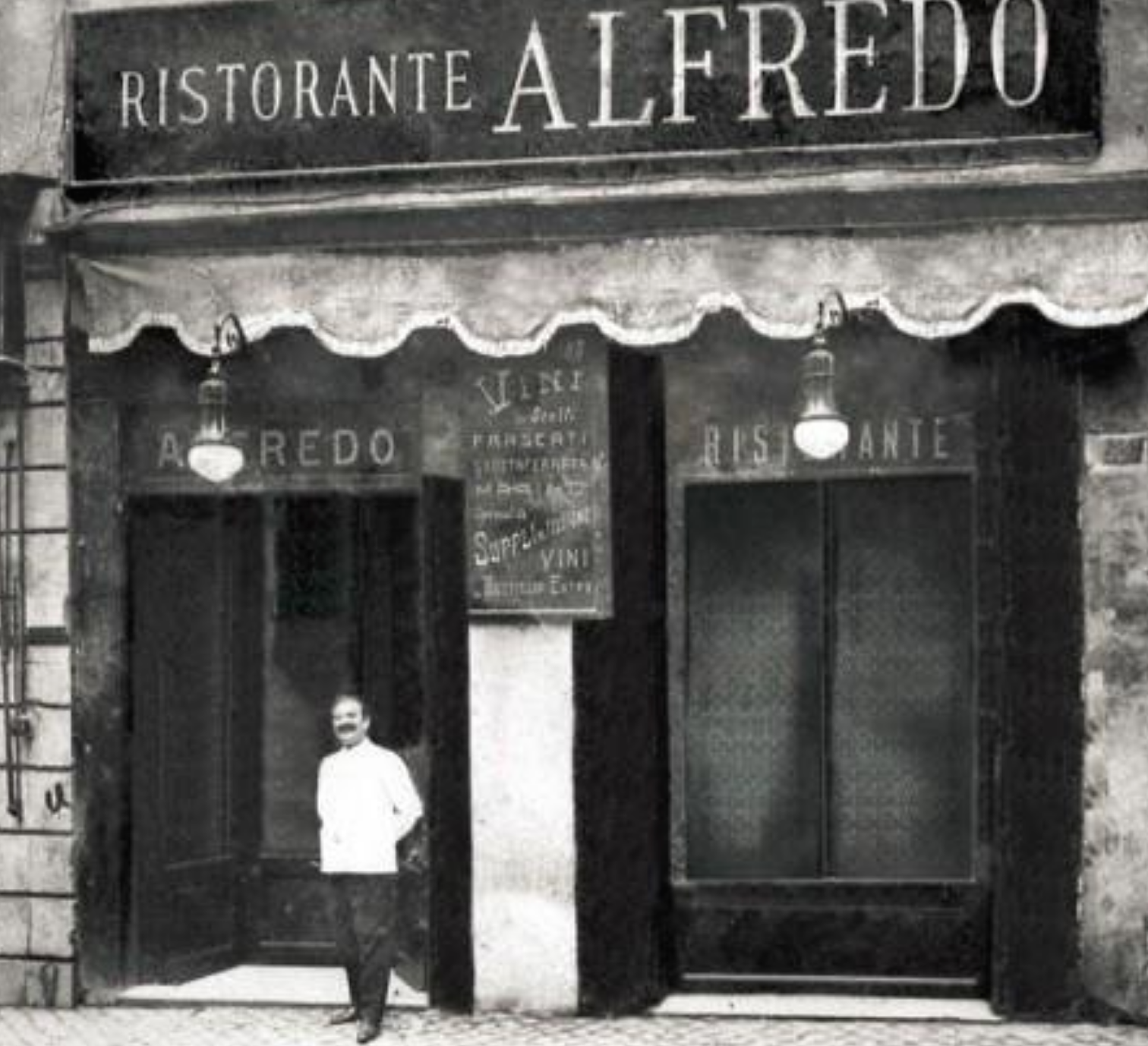 This is a story about a pregnant woman, a loving husband and a recipe that has toured the world. It was 1908, and Alfredo Di Lelio was a restaurateur in Rome. His wife Ines had just given birth to their son Armando but had completely lost her appetite. Worried about her health, Alfredo revisited a traditional recipe – the “fettuccine al burro” – and invented those pasta ribbons made with plenty of eggs and soaked in extra-rich triple butter and Parmigiano cheese. The woman soon recovered and he decided to call them “fettuccine all’Alfredo” and added the dish to the menu at his restaurant, Da Alfredo, in Via della Scrofa in the centre of Rome.
Years passed, Da Alfredo being the place to go – and not just for the locals. In 1927, while on their honeymoon, Hollywood stars Mary Pickford and Douglas Fairbanks stopped there and ate the “fettuccine all’Alfredo”. It was love at first taste: the couple came back any night until the end of their vacation, and before leaving they brought him a gift: a golden fork and spoon engraved “To Alfredo, the King of Noodles 1927”. But that was just the beginning: back home, the couple told everyone how amazing was that pasta – surprisingly without tomato sauce. Hollywood got mad about it, and in 1928 the “fettuccine all’Alfredo” entered “The Rector Cooking Book”. American chefs, however, started to vary the original recipe, lacking the first quality ingredients that Alfredo used. Yet, his “fettuccine” – or at least what they looked like – had conquered the States.
Then came WWII and Alfredo closed his restaurant. After the war, he sold it to his waiters (who reopened it in the same spot) to start in 1950 a new business on his own: “Il Vero Alfredo” in piazza Augusto Imperatore, run together with his son. It got soon teemed with celebrities: pictures of Alfredo joking with Bob Hope, Ava Gardner, Anthony Quinn and Sophia Loren brought him and his “fettuccine” even more fame.
Nowadays, the “Alfredo sauce” is one of the most popular Italian food in the US, just like pizza and spaghetti-and-meatballs. We bet that Alfredo himself would have never imagined to be sold in the frozen food section when, more than a century ago, just tried to make Ines eat again.