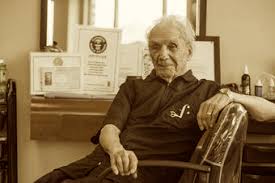 He was the world’s oldest working barber. When he passed away in September 2019 he had retired just weeks before: he had turned 108 at the beginning of March. Anthony Mancinelli was what people call a hard worker.
Anthony was born in Montelimone, Basilicata in 1911. He moved to the States with his family when he was 8 and settled north of New York. Three years later he was already working at barbershops as a helper, at 12 he started as a barber. Since then he never stopped, except to serve in World War II. In 1930 he opened Anthony’s Barbershop in Newburgh, New York and run it for 40 years. After selling it, he started freelancing working at other shops. “Sometimes it happens that I cut four generations families”, said Anthony last year.
He became a sort of celebrity for his 96th birthday, when Guinness declared him the world’s oldest working barber. No one could imagine he would hold the title for 12 years more. When asked for the secret of his longevity, Anthony always looked up to sky thanking God. He never took a pill in his life, and managed to live by himself until the end. Every day, on his way to work, he stopped to visit the grave of his wife, Carmella, who left him in 2004 after 70 years of marriage.
Anthony sometimes indulged in a glass of whiskey, but paid much attention to his diet: “I love spaghetti, but I only eat the thin ones. So I don’t get fat”.