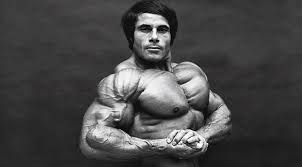 He was Arnold Schwarzenegger’s best friend, his best man when he got married, his co-starring partner. Franco Columbu was one of the world’s most awarded bodybuilders, even though when he was a kid he didn’t seem to have the “physique du role”.
Franco was born in Ollolai, a mountain village in Barbagia, in the very centre of Sardinia, in 1941. His parents were shepherds. He was a small boy, short and skinny, and he often got into fights with the other kids. “Until I was 11 –he told in an interview in 1982 – everyone beat me up a lot. Eventually, one day I started beating the others up. Nobody could touch me anymore”.
His attitude for fighting didn’t go unnoticed, and his being at the centre of the scene helped Franco to focus on one issue: becoming good at competing. So he started boxing, then approached the bodybuilding. It was the mid-1960s: Franco was still a short guy (less than 5 feet and 6 inches), but he kept dedicating himself so much to sculpt his body that he managed to win the titles of Mr. Universe, Mr. World and twice the Mr. Olympia, that is considered the Oscar of the bodybuilders. They called him the Sardinian Samson.
Meanwhile, he had met Arnold Schwarzenegger. The two soon became friends: a tie so deep that, when Schwarzy moved to the States he asked to have Franco by his side. Franco and Arnold were like family: they trained and competed together, and in the 1980s they also co-starred in the movies that skyrocketed Schwarzenegger’s fame, “Conan the Barbarian” and “The Terminator” above all.
When Franco passed away, Arnold posted some moving lines on social media: “From the minute we met in Munich, you were my partner in crime… Here in the States I could thrive without money, without my parents, but I couldn’t thrive without you”.